The most representative symbol of the Pilgrims is the shell (vieira). In the Codex Calixtino is called “Camino sign”, because it was given to the pilgrims that entered the city after finishing the Camino, a scroll was handed to confirm them as pilgrims and a shell was placed on their hat and coat.

And as there is nothing new under the sun, in Santiago was a great market around them. In the shops in the city were selling authentic shells coming from Galician beaches, but also tiny shells made of other materials that were sold as souvenirs and that pilgrims took as gifts to family and friends. Out of town sale was forbidden under threat of excommunication from the Catholic Church.

The shell was also understood as a stylization of the goose’s leg (oca in Spanish), extended initiation symbol along the French Camino, only to mention the many place names that exist in the journey, as Montesdeoca, Valle de Oca, Arraya de Oca and many more. However, is a much more ancient symbol, signifying rebirth, and as such, is associated with the goddess Venus. Do you remember “The Birth of Venus” by Botticelli in which the goddess comes out of a shell?

But, once forgotten the real sense that originally had, it became necessary to provide it with a miraculous act that proved it. The legend of the “Knight of the shells”, in the case of the shell, legitimizes its use.

The legend begins when the disciples of Santiago took to the sea with the body of their master and arrived off the coast of Galicia. When they were at the height of Bouzas (Vigo), they saw the celebration of the marriage of a gentleman on the beach. Young people participating in a competition called “bafordar”, a game that consisted of throwing a spear at the air and gallop to collect it before it touched the ground. The groom threw his spear and when he was about to retrieve it , the horse approached the water and both horse and saddle, sank and disappear from the view of the guests, leaving only a small trail of foam that was heading to the boat.

When the horse and knight came out next to the boat, they were over the water as if they were in land. To the amazement of all who were on the beach and the same knight, both were covered with shells.

The knight went to the sailors and asked them what they thought of it, and they answered him:

“Truly God wants to raise you and Jesus Christ, by this his servant that we bring here with you in this boat, has wanted to show by him the power in you and all those who are now alive and who then will have to come, in this his servant wanted to love and serve and who come to find where he is buried and that should bring shells like those that you’ve been “conchado”, as a sign and seal of privilege”.

The wind swelled the sails and the boat went on his way and for this reason, all the pilgrims carry a “vieira” shell.

WE HAVE COMPLETED THE COVID GOOD PRACTICE ASSESSMENT 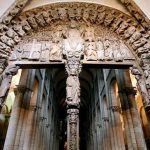 Legends of the St Jame’s Way